Campaign Overview The RACLETS - Role of Aerosols and CLouds Enhanced by Topography on Snow - campaign uniquely combines cloud and snow research to improve the understanding of...

The RACLETS - Role of Aerosols and CLouds Enhanced by Topography on Snow - campaign uniquely combines cloud and snow research to improve the understanding of precipitation formation in clouds and snow deposition on the ground.

During the RACLETS campaign in February and March 2019, an extensive set of instruments was deployed in the Davos regions including aerosol, cloud, precipitation and snow measurements. In a unique cooperation between cloud and snow research groups, this study aimed to observe the complete life cycle of ice crystals:

The measurements were contextualized by using regional numerical weather models for the atmosphere and high-resolution models for snow deposition.

To explore the campaign sites in a short introduction video, just click on the picture below. 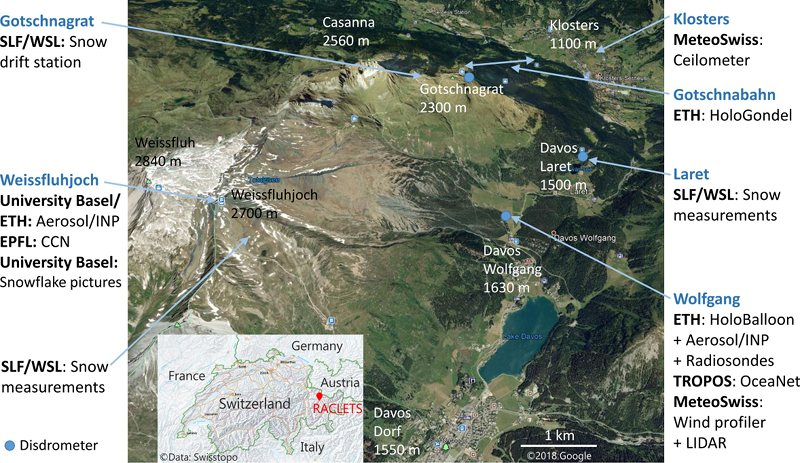 To cover the spatial differences of the topography, instruments were deployed at five different locations and on a cable car. The main measurement site was located in Davos Wolfang, 1630 m above sea level (a.s.l.). Here, clouds were probed in-situ by a tethered balloon system (HoloBalloon), radiosondes were launched, precipitation was measured (disdrometer), remote sensing instruments were deployed (OceaNet station, Wind Profiler and Wind LIDAR) and aerosol and INP measurements were carried out to study the atmosphere. The mountain ridge Gotschna separates Davos Wolfgang in the south from Klosters in the north. In Klosters (1170 m a.s.l.), a ceilometer was applied to measure the cloud base. On a cable car, running on the north side of the ridge towards Gotschnagrat (2285 m a.s.l.), HoloGondel was attached, which took in-situ images of ice crystals and droplets in clouds. A snow drift station and a disdrometer were located at Gotschnagrat. At the mountain site Weissfluhjoch (2700 m a.s.l.), south of Gotschna, Aerosols, INPs, CCNs were measured in addition to analysing snowflakes and performing snow measurements. Snow and precipitation measurements were performed in Laret, which is located in the valley at an elevation of 1522 m a.s.l. and in a distance of about 1 km north of Davos Wolfgang.

The data recorded during the campaign can be accessed via the following subprojects (as link):

More information about participating insitutes can be found here: